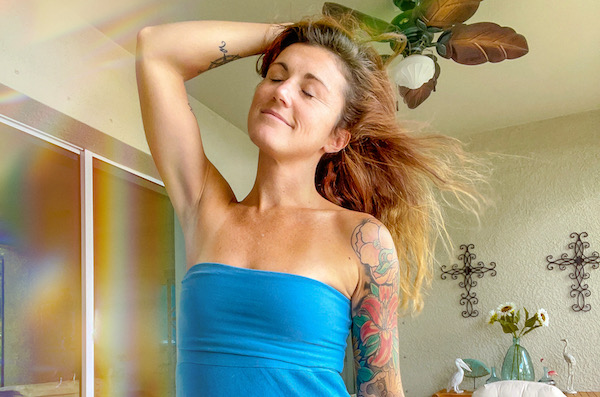 Rome is one of two things to most people. It’s either a gorgeous, historical, romantic country where the food is plentiful and the people are stunning. Or, it’s a black hole of too many tourists wandering around with selfie sticks and you can barely breathe because the claustrophobia of human beings would make you want to sit inside your Airbnb for the next three weeks instead of exploring this landmark of a city. That last one was me.

Don’t get me wrong, Italy is in my blood, my history, my family lineage. Maybe my view would’ve been different if we’d stayed a month in Naples or Assisi. But we didn’t. During our time backpacking in Europe, my previous partner and I found a studio apartment for $700 USD for one month on the outskirts of Rome’s city center. What a romanticized thought. Our own apartment waking up to the Italian sunrise drinking coffee.

The apartment had a two burner electric stove top, an espresso maker, one closet with eight hangers, and a queen-sized bed. The bathroom was essentially a shower curtain covering a giant hole in the wall I think they refer to as a door. Mosaic tiles in various shades of dark blue lined the bathroom from floor to ceiling. The shower head hung directly above the toilet seat so you could kill two birds with one shit and immerse yourself in a shower-urination experience.

Bathing had to be under five minutes, otherwise the water wouldn’t drain. Instead it would quietly seep into the bedroom. Next thing you know, the bed has become a lifeboat.

This would be our home for the next month.

Shortly into our stay, I became profoundly depressed. There were so many factors I didn’t consider in this decision to remain stagnant after months of bouncing every few days. The neighborhood we stayed in didn’t really have much in it except a chain grocery store and a short trail to walk along. I couldn’t speak the language which made it difficult to interact with others resulting in even more isolation.

There was a constant knot in the pit of my stomach and a voice inside my head saying, “You will self-destruct in ten, nine, eight…”

This was the very first time I exposed myself to my partner in the most vulnerable way possible. I allowed him to enter inside of my brain.

We only dated for a brief moment before we decided to travel together. The thought of sharing my true self with him didn’t seem ideal after only dating him for six months. We were in Italy after all. We should’ve been passionately enthralled with each other drinking wine and gorging on endless bowls of pasta.

You move beyond that quickly when you spend every waking second with a person. The barriers are broken down much sooner and your true colors are witnessed before you even have a chance to sink into the overly glorified initial stage of dating.

My depression wasn’t something I could really hide from him anymore. I never had time alone to just sit there and cry. There was no wallowing in my sorrows by gluing myself to the bed. After a month of constant arguing about my lack of desire to do anything, I felt it was time to really let him in.

I’m a morning person. Most mornings, I drink my coffee and try to give myself the space to write.

One particular morning during our stay in Rome, I decided it was time to write something to help articulate to him what my depression really looked like. If we were going to continue traveling together, I needed to open up so he could empathize instead of feeling shut out of my life. So I wrote him a letter and read it out loud.

Once I finished, he was silent. Not in a what-the-hell-do-I-say kind of silent, but in a reflective, almost taken back with love and sadness type of silence. I think in that moment he realized the girl he saw at the bar when we first met was only a thin outer layer of who he was really committing himself to.

Almost four years later, I still continue to peel back the layers of my onion. Yes, they sting and make my eyes water. But when cooked to perfection, it’s well worth the struggle.

It’s really the starting point which triggered my internal battle of wanting to come back home from traveling. There were issues I refused to face because I thought to some degree I could escape them. I could run faster than my depression. I could speed right past my struggles with abandonment, codependency, and self worth. But the truth is, I couldn’t and I still can’t.

No matter where you go in life, your problems will always follow you.

All of us have a beginning. No matter what screwed up feeling or thought process that goes on in your head, it all stems from somewhere. It’s just a matter of figuring out the origin of this said screwed-upness, recognizing it, and not allowing it to have complete control over you. The truth is, there is no such thing as a good or bad memory. They’re just memories we’ve trained our mind to view and react to in a certain way.

Think about one event in your life that has completely changed the course of everything you thought you knew. How it’s impacted you. How sometimes you think, “well if I just did this instead,” as your mind goes down the winding tunnel of should haves and could haves. We’ve all been there. A lot of us are still there. And guess what? That’s perfectly okay, because we’re in this together.

You are not alone. You are never alone. There are more than 300 million people on this planet who suffer from some form of depression. That is an insane number of people, but for me it was a comforting number to discover. It showed me that I’m not special or different. I’m human.