How To Overcome Resistance And Start Living 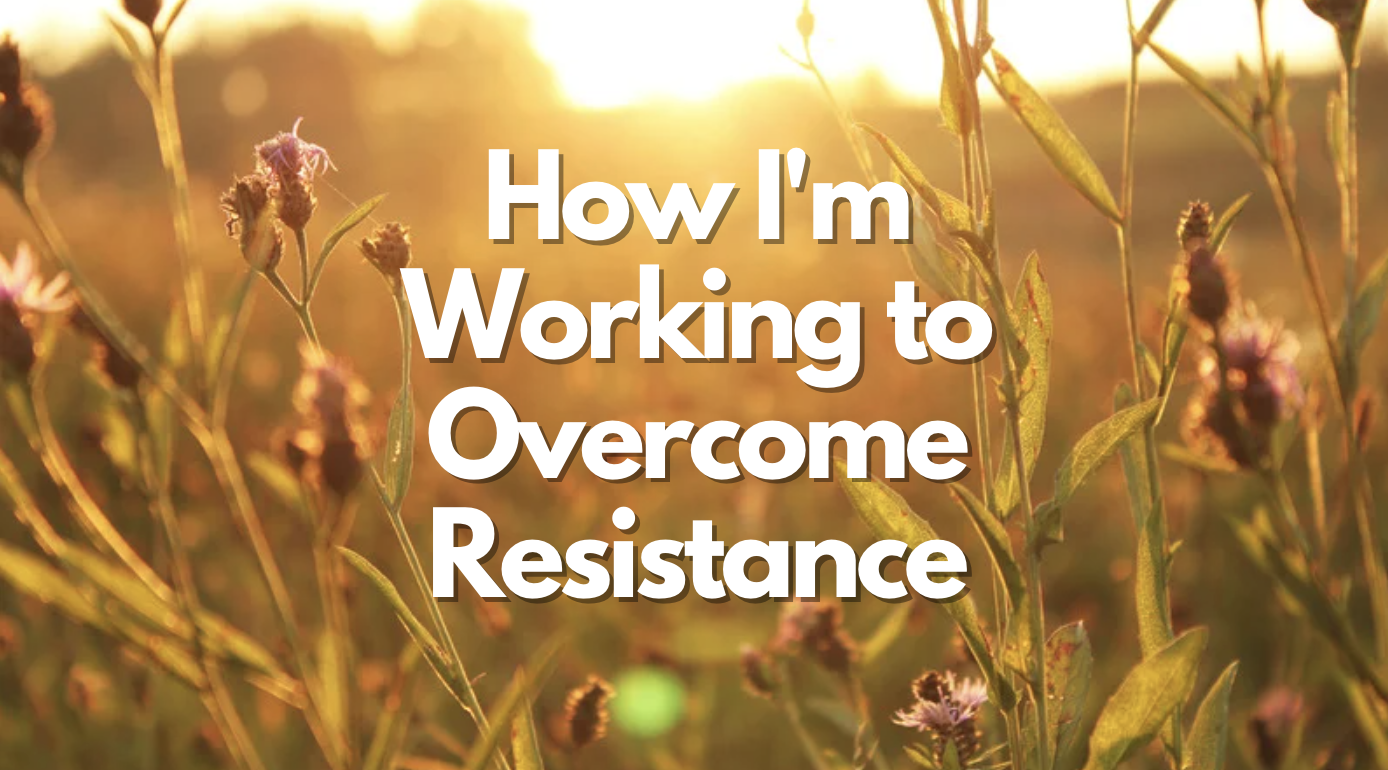 I’ve struggled with my inability to overcome resistance for a long time. Resistance likes to wear costumes. It disguises itself as shame, self-sabotage, fear, doubt, procrastination, pride, and envy. This sneaky little monster shows up bright and early before you have the chance to open your eyes to greet the day.

A few weeks after the release of my first book, I fell into a severe depression. I thought having my story in other people’s hands would give me the ultimate sense of freedom. The shame I carried about my depression and eating disorders would be lifted, releasing me from its chokehold. Turns out, I was battling something larger.

The True Meaning Behind Resistance

I started reading Matthew Kelly’s book, Resisting Happiness, which was gifted to me by my old church several years back. They passed them out for free during Advent and through years of traveling and moving to various states, the book always came with me. That didn’t mean I’d actually read the pages. But I knew I’d get around to it someday. That someday finally came.

Kelly opens the book talking about resistance. He said if we allow ourselves to be defeated by resistance by hitting snooze on the alarm clock, we have lost our very first battle with it and will more than likely be a slave to it for the rest of the day.

The next morning after reading the chapter, the word resistance spread across my mind like a billboard in Times Square. I shot out of bed and immediately put on my running clothes. I laced up my sneakers, wrapped Luna in her harness, and hit the concrete. My feet ran as fast and as hard as they could without dragging Luna behind them.

But to overcome resistance isn’t just about being productive or procrastinating a morning run. Resistance, as I said, wears disguises and shows up in every aspect of our lives.

How Resistance Showed Up In My Life

For so long, I’ve resisted confrontation with suppressed memories. I’ve resisted having faith in myself due to fear and self-doubt. I resisted holding myself accountable by making excuses because doing the actual work was “too hard.” I’ve resisted being still and sitting in the silence because I was too afraid to face myself.

What I’ve learned is when we resist, we’re turning our backs on ourselves. And if we’re not going to show up for ourselves, how will we ever have the ability to finally break the damn narrative and start living a new one?

I even resisted writing my second book. I read through old Google Docs trying to clump together stories of my past. Essays of lessons I’ve learned from my travels. But no matter how hard I tried to create a seamless flow, I couldn’t do it. Nothing made sense. Even rereading the words I put on digital paper had me asking, “Who the hell is the person who wrote this?”

It’s scary to admit, but I was resisting the idea that I could no longer use these stories because I was afraid to let go of them.

I was afraid to grieve the person I once was.

There it was, hitting me like a bag of bricks.

If I wanted to overcome resistance, I had to start letting go. Of all the ways it has shown up in my life, the most transformational way was when those words fell out of his mouth. He’d put a name to the one thing I’d been resisting this entire time.

Myself. Not this new self I’d been working so hard to teach the power of self-love. It was my past self. The one I was still holding onto. The one who believed in the false narrative that I’m not worth the hard work, endlessly repeating the words, “you’re not enough” in my ear. The old self who believed I was a failure and how I don’t deserve the good things life has to offer me. The past version of myself who thought I only deserved scraps off the kitchen table, when in truth I deserve the whole damn three-course meal.

And once you put a name to something, it becomes significantly easier to face and conquer.

How I Overcame Resistance

One day I made the decision to change my life for the better. It was time to wake up and started fresh. I took Luna for a long walk listening to music to connect myself with God. I went for a run, came home, showered, read a book, and finally, when I was ready, opened up a fresh Google Doc.

The book needed to start from scratch. I was ready to do the hard work of saying goodbye to the person I once was.

Resistance isn’t ever just one thing. I still find ways in which I battle to overcome resistance throughout my day. I occasionally resist eating breakfast because my eating disorder thoughts try to tell me it’s not that big of a deal if I skip what is considered the most important meal of the day. Every once in a while I resist opening up to the man I love because of old behaviors that were ingrained from my previous abusers. And sometimes I resist sitting down in front of my computer and allowing myself the time to write because I’m feeling too lazy or get distracted by the white noise of being “too busy.”

The difference is that now, I acknowledge these moments. If I resist, I take action. I sit with myself and try to understand why I felt the need to resist. What was the truth behind doing something I know would be good for me? Because that’s just it. We only ever resist the things that are good for us.

Lauren Dow is the author based in Greenville, SC. You can support Lauren’s work to normalize the discussion around mental health by checking out her books, In Body I Trust and Your Wild Journal.